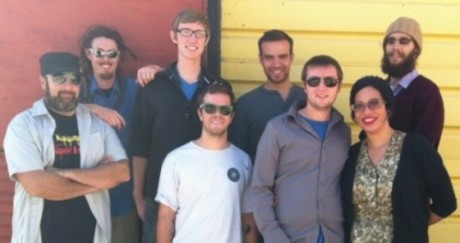 There might be a debate about the fundamentals of our economy, but the Traverse City reggae band, The Fundubmentals are rockin’ steady.
The Fundubs, as they are affectionately known, have been busy gigging around the state in Lansing, Grand Rapids and Flint. Locally, they have been playing regularly at the Union Street Station. On Devil’s Night, Thursday, October 30th, they will be playing at the Serenity Tea House in downtown Traverse City.
The band is Marc Alderman on drums, Marc’s wife Dede Alderman on vibraphone, Sean Dye on guitar, Tree VanderMolen on bass and Jack Fivecoate on keys.
The band’s genesis was at a casual weekly get-together at the Alderman’s that they called Sunday Dub. It was an open invitation to their musician friends.
“The idea was, whoever showed up, we’re going to play this genre of music,” Dede Alderman said in an interview with the band at TC’s Homegrown Organic Eatery. “But what we noticed was, the same four or five people would come, and that’s when we became a band.”
Dub is the the term for the style of reggae, with big beats and ample amounts of reverb and delay that gives the music a spacious, dreamy sound. “What draws us to dub is that is very explorative,” Alderman said “It is not necessarily set by: ‘This is the song.’ It gives us moments to explore.”

GROOVE POWER
Dub is where they start, but they also play ska, (the faster, more excitable cousin of reggae), roots reggae and an occasional Bob Marley cover. The one constant is an emphasis on the groove. They are able to do what fewer bands seem to be able to do nowadays, which is fill up the dance floor. Their shows feature a gradation of actual dancers close to the stage, to those swaying to the rhythms on the edges.
Northern Michigan is a long way from Jamaica and the Fundubmentals are respectful of that and do not pretend to be Rastas, pepper their raps with “Jah, mon,” or ever ask the crowd “Are you feeling irie?” Still, they have a strong connection with the spirit of the music.
“It is great to play danceable music,” Sean said. “I feel we are called to that, but we are all big fans of reggae music and we are also dedicated to the spiritual doctrines of love, higher love, that greater power. That’s the connection. That’s the vibe. There’s a little bit of a bigger meaning to what we are doing.”
When asked what the wildest dreams they might have in mind for the Fundubmentals, none of the band members express any interest in fame, fortune or extensive touring. They all have other musical projects. Marc and Dede perform at schools and festivals as Rhythmic Adventures, play jazz together as a trio with bass player Tim McKay and host a weekly drum circle at Sun Radius at Logan’s Landing in Traverse City. Sean plays acoustic music every Thursday at Oryana’s Lake Street Cafe. Tree also plays folk and bluegrass music.

FUN FIRST
“We think of the Fundubmentals as our fun band,” Dede said. “We don’t want to get caught up in the business aspect of it. My biggest dream is that it remains fun and we keep that collaborative vibe. We just want more and more people in the area to have a chance to hear reggae music.”
The Fundubmentals have a new CD for only $5. Marc Alderman said they, “front loaded their expenses on the recording and went bare bones on the packaging.”
In addition to the Devil’s Night show at the Serenity Tea House, the Fundubs will be playing at Short’s Brewery in Bellaire for a Winter Solctice Celebration, December 19-20. For more info see www.myspace.com/fundubmentals.

9 years ago in News
UPCOMING ARTISTS