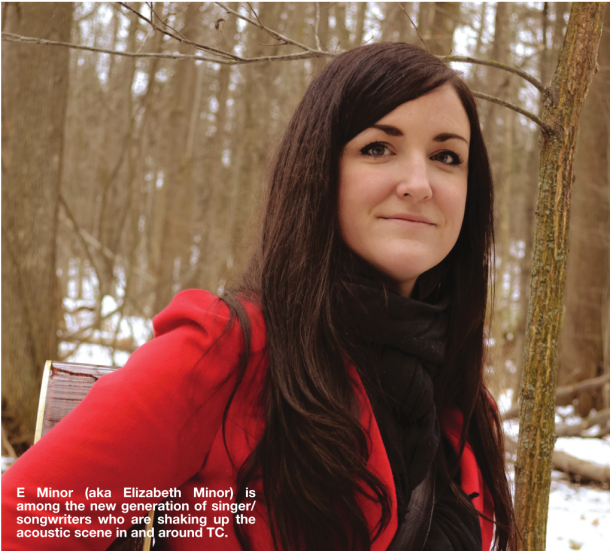 E Minor Is In Tune With Her Music

E Minor is a minor scale in music based on the note E – and it also happens to be the stage moniker of aspiring local singer/songwriter Elizabeth Minor, who’s been causing a buzz around Traverse City with her “smoky folk” melodies.

“Although I have had mixed reviews on the ‘E Minor’ name, it started as a nickname by my bass player, Caul Bluhm, and kind of stuck,” Minor explains. “I like it – it’s short and catchy – I see it as my name as well as a play on words.”

Words and tunes are what Minor specializes in now, writing her own songs, which is something she started at an early age.

“My father is also a musician, and he writes his own music on piano, so I was raised around music,” she says. “I wrote my first song when I was 11, singing it a capella. At 16, I picked up the guitar and continued to write music. My older sister, Sarah Landry Ryder, is also a local singersongwriter; her music taught me how to harmonize, and improvise, and she inspired me to write my own music.”

Today, Minor’s written enough music to record a new album, which she’s funding with a successful kickstarter.com campaign. She says she was “shocked and amazed” by the whole Kickstarter experience, a crowdfunding website that allows fans of her music to financially “chip in” to a project for which they’ll receive “rewards” such as copies of her album if the funding goal is met.

“Kickstarter really helps the community become involved in the arts,” Minor says, “I am so honored to be supported on this level – it is truly life-changing.”

Minor’s been in the studio since August, and hopes to have the new album completed by spring.

“The songs on the album will be both old and new,” she says. “The title of the album will be ‘Dust Out of Sand’ and I am recording it at Spiral Sound Studios with Aaron Wolinski and various other Traverse City musicians, including Blake Elliott and The Robinson Affair, John Phillips, The Fundubmentals, and my father James Landry.”

Her songwriting process is quite specific – she says she “almost always” starts a song with lyrics and melody, and finds one particular locale a little more inspiring than others.

“For some reason, I start a lot of my melodies in the car while driving,” she laughs. “It sounds silly, but I have started many of my songs just humming while I drive.”

Guitar, she says, comes in second to her voice, and it usually takes her a long time to complete her songs, which are most often inspired by life, heartache, love, being a parent, and world issues.

“I am not one of those musicians who can write non-stop,” she says.

But she’s obviously got enough happening musically to fund that album and keep her fan base continually growing.

“The reception has been great – I love Northern Michigan,” Minor enthuses. “Since I was a kid, I have been watching local musicians at music festivals – I grew up going to Blissfest in Cross Village – and I love the amazing support here.”

E Minor will be performing at the Art Bomb at Right Brain Brewery in Traverse City on January 5. A story on the Art Bomb will run in next week’s Express.

9 years ago in News
UPCOMING ARTISTS